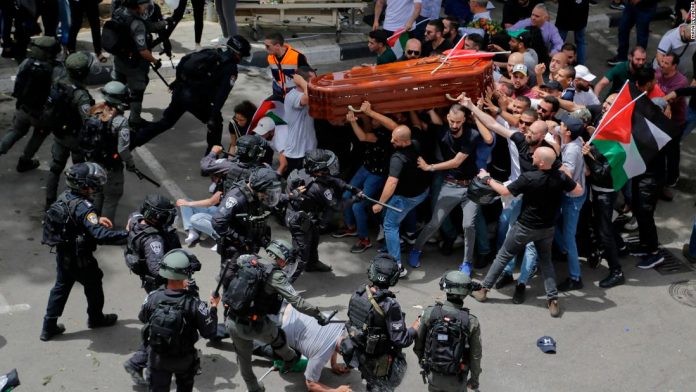 “They could have easily blocked the road if they didn’t want to see the funeral leave the hospital but the attack was intentional and brutal,” Tony Abu Akleh told CNN.

Speaking at St. Joseph Hospital in East Jerusalem, where Friday’s funeral procession began, he said he had spoken to Israeli police before the event.

“The police called me and asked me to go to the police station and they wanted to know the route of the procession and the arrangements taken for the funeral. They asked us not to have any Palestinian flags risen, any slogans or chanting. They didn’t want to hear that,” Abu Akleh said.

“And they wanted to know the number of participating in the funeral procession. I told them I can’t give you any promises, I don’t have the numbers and I can’t control the crowd. This funeral is a national funeral for everyone to participate in. And that is what we saw,” he added.

The hospital condemned the “violent intrusion of the Israeli Police” in a statement on Monday.

Even Deutsche Financial institution is getting out of Russia