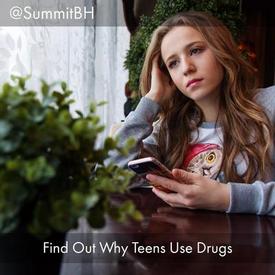 The teenage years are a vulnerable time of life. Teens are learning how to navigate the transitional period between adolescence and adulthood. They are changing physically and emotionally, and may look like they’re all grown up, but the truth is, their brains will not be fully developed until they are in their mid-twenties. That means that teenagers are not always able to make the best decisions. Unfortunately, one of the decisions that often comes up during those vulnerable years is whether they should start using drugs or alcohol, reveals the experts at the medically supervised detox center Serenity at Summit.

What is it that makes teens decide to use drugs or alcohol? It could be a number of things. The following are ten of the most common reasons that a teenager may try drugs or alcohol and go on to abuse them.

Peer pressure can cause just about anyone to do something that they know isn’t a great idea, but it’s especially powerful during the teenage years. Insecurities can be overwhelming for the average teen, and fitting in with other kids is often a high priority. That makes saying no when offered drugs and alcohol difficult. Saying no can have negative consequences – being laughed at, bullied, or rejected, just to name a few. But, more often than not, peer pressure is a wolf in sheep’s clothing. While teens may feel like they are fitting in with their peers, they may be becoming drug or alcohol abusers or addicts.

Throughout the ages, adolescents have wanted to feel like they are all grown up – it isn’t a modern phenomenon. “I’m not a kid anymore” is something that parents of teenagers hear frequently, especially when their teen wants privileges that come with age, like drinking alcohol. It isn’t surprising that they are attracted to the things that make them feel older and more sophisticated. Drinking, smoking, and using drugs can enhance that feeling. Unfortunately, what usually happens is they overestimate their level of maturity and underestimate their vulnerability.

Kids who grow up with parents who use drugs or alcohol usually follow suit. That’s what they know and what they have learned. And, of course, if parents are using or drinking, teens also have easy access. Although some teens will act in an opposite manner, shunning all substances when they have seen the negative consequences that drug and alcohol use cause, they tend to be the exception to the rule.

Kids are curious. The desire to try new things, see how something feels, or what all of the hoopla is about can all be things that tempt a teenager to try drugs or alcohol. Typically, teens have some degree of independence that they didn’t when they were younger, and that mixed with natural curiosity can make trying drugs or alcohol very appealing. Sadly, the urge to try new things can be the first step toward substance abuse and addiction down the road.

Anyone who is bored can easily get into trouble – especially a restless adolescent. That chance only increases when a teen has friends who are bored too. Passing the time with a couple of beers with a group of buddies can not only seem like a great idea, but it can also lead to the slippery slope of addiction.

Being a teenager isn’t easy. Some teens struggle with emotional pain and are especially vulnerable to drug and alcohol use or abuse. Just as many adults do, teens may begin using substances as a way to self-medicate the emotional distress they are feeling. They quickly learn that drinking or using drugs is a way to numb their feelings – at least for a while. For teens that live in a conflicted home environment, the risk of using drugs or alcohol as a way to self-medicate is even higher. Unfortunately, this “solution” is often the precursor to addiction.

The teenage years are the time when kids are trying to assert their independence and separate themselves from the authority of their parents. It’s typical for a teenager to push the envelope regarding the rules and boundaries that their parents have set. This can be especially true when they have parents who are overprotective and untrusting. All teens, but especially those in situations such as those, are at risk for rebelling by using drugs or alcohol.

Kids in general don’t always know what is good for them and what isn’t. This isn’t because they lack intelligence, it’s simply because they don’t have the life experience to make sound decisions. Trying drugs or alcohol may seem innocent enough to teenagers, they may think that there is no harm in trying it – because they are ignorant to the risks. It may look to them like the kids who are using drugs or alcohol are having fun and they are the ones missing out. What they don’t understand is that thinking “What could go wrong?” or “Why not?” can be very dangerous mindsets.

9. They Want to Have Fun

Partying with friends sounds fun – that’s no surprise. What wouldn’t be fun about spending time with friends, sharing in the fun they seem to be having with drugs and alcohol? It probably seems silly, enjoyable, and entertaining. The experience will make for great stories on Monday at school. Of course, what they don’t understand is the potential for negative consequences – injuries, arrests, assaults, sexual wrongdoings, addiction, and even death are all things that can happen quickly when teenagers party with drugs or alcohol.

10. They Have Become Addicted

No one, including teens, begins using drugs or drinking alcohol with the intention of becoming addicted. Because of their age and inexperience, teens may think that nothing bad will happen to them. They may even think that addiction only happens to the homeless, down-on-their-luck, old men who have been drinking or using for years. Of course, that couldn’t be further from the truth. Addiction can sneak up quickly and without a person even realizing it’s happening. And it can happen to anyone, regardless of his or her age.

Talk to Your Teens About the Dangers of Drugs and Alcohol

The best thing that you can do to help your teen avoid the dangers of substance abuse and addiction is to talk to them. Keep the paths of communication open, not only about drugs and alcohol, but also about their life, their friends, and their feelings. And if your teen does become a drug or alcohol user or abuser, get them help right away. Addiction isn’t a phase that they will outgrow it’s something that almost always requires professional help to overcome. Reach out to find out more about what Serenity at Summit has to offer with their medically supervised drug detox program.