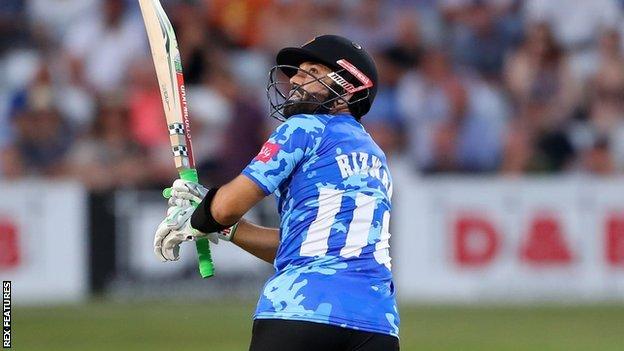 Sussex pulled off one of the surprises of the domestic cricket season as they beat Surrey at Hove to condemn the runaway T20 Blast South Group leaders to a first defeat of the campaign.

Surrey, who are also top in the County Championship, looked on course for another victory at 111-2 in the 11th over, chasing 173 to win.

But they lost their last eight wickets for just 44 to lose by 17 runs.

Hampshire were also victorious, while Notts and Yorkshire won in North Group.

Derbyshire’s hammering by neighbours Notts Outlaws, who plundered 247-5, their highest score in T20 cricket, came on a night when weakened Lancashire escaped with a point from their rained-off game with Durham at Blackpool.

That means Lancashire stay top, two points clear of Birmingham Bears, Northamptonshire and Derbyshire, who are all on 14 points.

Surrey’s defeat by struggling Sussex, who started the evening just one…