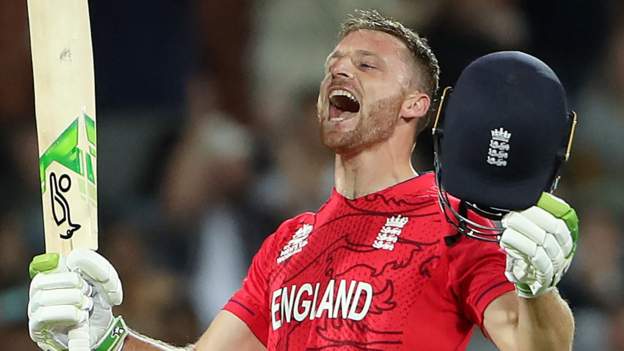 England stormed into the Men’s T20 World Cup final with a sensational 10-wicket demolition of India at the Adelaide Oval.

Openers Jos Buttler and Alex Hales overcame a feverish India-supporting atmosphere and chased 169 without the loss of a wicket.

They romped home with a massive 24 balls to spare to set up a final against Pakistan on Sunday and seal one of England’s greatest white-ball wins.

Hales ended 86 not out from 47 and Buttler unbeaten on 80 from 49, the England skipper clinching the match with the pair’s 10th six.

Earlier, England’s bowlers had restricted India well before Hardik Pandya’s 63 from 33 balls powered his side to what had looked a testing score.

But Hales, recalled after more than three years in the international wilderness, gave England a rapid start and Buttler…