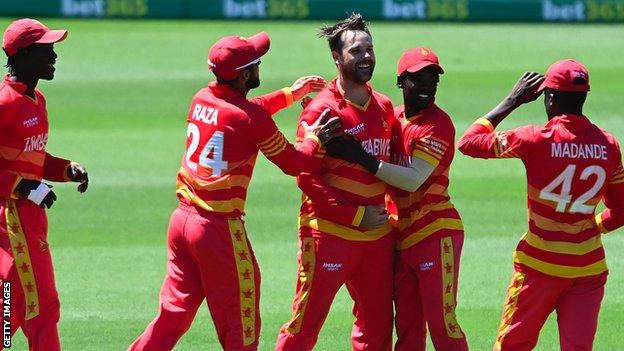 Ryan Burl is confident Zimbabwe’s historic One-Day International win over Australia will propel them to make an impact at this year’s T20 World Cup.

Having lost the first two games of the away ODI series, Zimbabwe registered only their third victory over Australia in 33 attempts spanning nearly four decades.

Coming after triumphs over Bangladesh in both white-ball formats, the Townsville success earlier this month should send the Southern Africans off to next month’s T20 World Cup charged with confidence.

“The last four months have been extremely successful and positive for us as a Zimbabwe cricket unit,” Burl told the BBC World Service’s Stumped podcast.

“Obviously winning the World Cup qualifiers, the two series wins against Bangladesh – the T20s and the ODIs, coming ‘Down Under’ and getting the one victory, we’re very positive and in a good headspace.

“David Houghton has just come on board [as coach]…