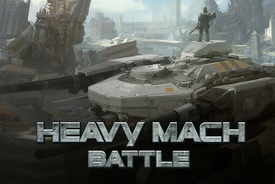 WeMade Entertainment (WeMade) has announced a major update to its hard-hitting and hugely popular Heavy MACH Series of games for iOS that will go live on October 19, 2011. With over 3.5 million active gamers worldwide, it is one of the most successful iOS games to be released out of South Korea. The current update focuses on user requests, such as improved gameplay and more in-game items.

Heavy MACH: Assault (formerly known as Heavy MACH 1) begins the journey, and may be the most known Korean mobile game in the world! Take control of a giant combat machine known as a “MACH”, where players can battle against more than 800 types of enemies, all the while tinkering with and upgrading their high-tech machine to become increasingly effective!

Heavy MACH: Battle (formerly known as Heavy MACH 2) continues the story of the pilots who control giant combat machines nicknames the terrifying “MACH”. A dynamic touch-action RPG, the newly added android system will lead players to the most challenging virtual battles to date.

Unlike the previous Heavy MACH series titles, the new iOs versions from WeMade hitting the global market will be completely free to download and play. Players that have previously purchased the game will receive a $2.99 in-game credit. The Heavy MACH series also offers a grand cross-promotion: those who pick up Heavy MACH: Battle first will receive a bonus when they first play Heavy MACH: Assault, while those who jump into Assault first will find a bonus awaiting them when they launch into Battle!

WeMade Entertainment, traditionally an online game developer and publisher, is now entering the mobile game for smart devices such as Apple’s iPhone and iPad.

WeMade gladly takes on the challenge of creating a new gaming niche in a rapidly changing world. A leading player in the gaming industry, WeMade combines the coding experience of industry veterans with the game server technology accumulated through the company’s online PC game development. Meet a new age of smart games where everyone meets through one game.