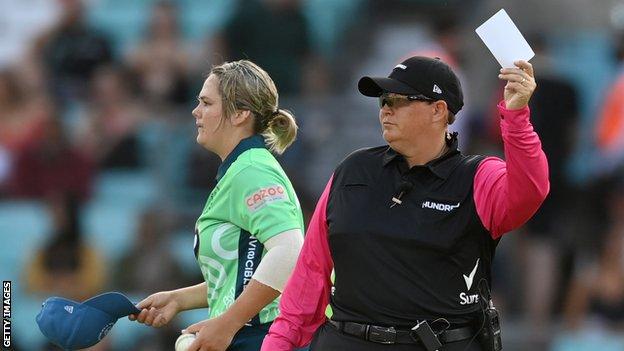 The Hundred, cricket’s newest format, is under way and with it come a few new things to get your head around.

One of those is the white cards which are being held up by umpires during matches.

They do this to signal the end of each set of five balls – what is known in cricket as an over.

In other forms of cricket the bowling switches ends after each over but in The Hundred they only do so after every 10 balls to make the game quicker.

Because of this organisers still needed a way to signal the end of each ‘over’, and as a result the white cards were born.

Other new innovations for The Hundred include bowlers being able to bowl 10 deliveries – two five-ball overs – in a row if their captain chooses and the pre-match toss, used to decide which team will bat first, which has been moved from the field to the music stage in the stand.

Fielding teams can also decide when to take a…