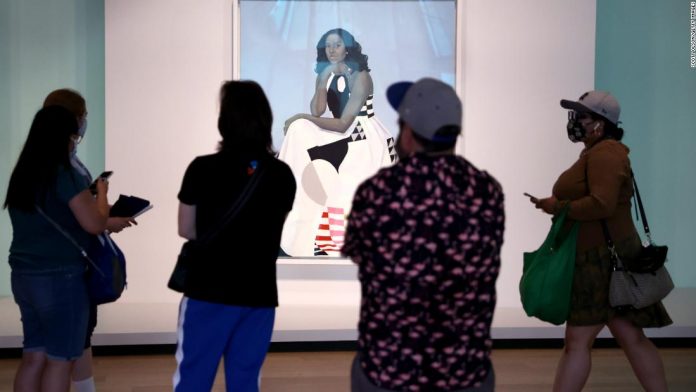 Three years after Barack and Michelle Obama’s official portraits were unveiled at the Smithsonian’s National Portrait Gallery, the paintings have arrived at the Art Institute of Chicago, where the former President and First Lady had their very first date.
On display there through mid-August, the artworks by Brooklyn-based Kehinde Wiley and Baltimore-based Amy Sherald — the first Black artists to be included in the National Portrait Gallery — have drawn millions of visitors, with Sherald’s portrait of Michelle Obama even inspiring Halloween costumes that year.

To commemorate the Chicago homecoming, the former First Lady and Sherald took part in a virtual conversation hosted by the Institute and moderated by Thelma Golden, the director and chief curator of The Studio Museum in Harlem. Reflecting on the artists’ interview process, which included personal visits to the Oval Office to speak with the couple, Obama said it must have been “a little…