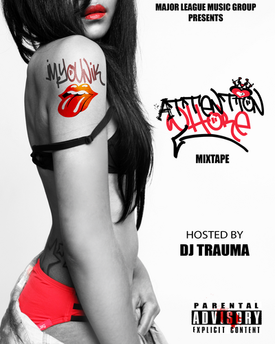 After a grueling eighteen months, the 1st Lady of Major League Music Group’s ImYouNik is ready to blossom with the release of Attention Whore. Introducing Ashley Harden, AKA “ImYouNik”. Hailing from Dallas Texas. ImYouNik initially got her start in Hip-Hop at the tender age of 10. From there she focused on honing her skills until she landed in Atlanta and was introduced to former Shady recording Artist Bobby Creekwater. Clearly the whole Shady Regime had an influence on the impressionable ImYouNik; so much so that she ended up doing a song called “Pause” with STS, Bobby Creekwater, and Obie Trice. While some compare her rhyme style to that of Eminem or Yela Wolf, or even a MGK, she refers to it as her own unique style of rhyming.

The first music project she put out was entitled “Clueless” and that project was based on a “clueless” affluent black girl with affluent white girl problems. “That was really the story of my life at that time”. Says the barely 21 year old Dallas native. “I was spoiled and used to mommy and daddy taking care of everything.” That is until daddy cut me clean off financially in the middle of the promotion of Clueless. I was naive at that time. I was around people that I now realize didn’t have my best interest at heart and I was young and trying to find myself. You can hear it on the “Clueless” album..”

“It’s kind of like the sheltered rich girl that has never been anywhere or exposed to anything and then you get around people who want to party, you want to be like them and fit in and then you are exposed to everything.”

“These songs are based on life experiences that I may have gone through or I have seen other people go through. Clueless was my first project and the beginning of me finding myself. I also realized how much growing and maturing that I had to do in order for me to be taken seriously.

“I no longer look back to my past, it was a great learning experience.” When asked, “Who is ImYouNik?”

Let hip-hop veteran and the general of emceeing Sha Stimuli tell it she is raps future and the girl the world needs to see. On the mixtape there is a freestyle the both of them did to Big L’s five fingers of death which when heard you can clearly see why he has co-signed her lyrical capabilities but let ImYouNik tell it:

“Im a hip-rockster. I love rhyming and singing to rock music. I’m also as lyrical as they come when it comes to female rappers so there is this whole thing of finding a balance. I can get on trap records and get on my Texas boss bitch shit, or I can get on some straight hip-hop and backpack with some of the best of them or just make great music that the fans want to hear. I’d like to think that I’m very versatile. Some people want to say that I’m an entertainer but I would have to lean towards more of a musician. I can read and write sheet music and play instruments. I do participate a great deal into the production of my sound. Currently I’m taking guitar and piano lessons to tighten up my skills. I feel like you can never work to hard in this business.”

A year later and all grown up is the birth of “ATTENTION WHORE” the mixtape. When asked what inspired her to write this project? She states: “I wanted to get so far away from the Nicki comparisons. That is all I kept hearing is, “she reminds me of Nicki, or she sounds like Nicki”, and clearly we have two different rhyme styles. Not to mention, I’m an actual musician. I wanted to do something that would make me stand out as an artist so I got with a different set of producers that made me feel comfortable to “rap my ass off” as my manager would put it.

And rapping her ass off is putting it lightly. She took an E-40 record and made it her own and called it “That Hoe” and she is rapping in a rock star kind of way with all the makings and trimmings of head banging mania.”Attention Whore” is a combination of Rock music mixed in with hip-hop. I’m what you call a hip-rockster”.Say’s the 21 year old musician.

ImYouNik is about to be a force to be reckoned with. From Capella freestyles, with hardly no clothes on in the middle of winter, in Dallas to the hard hitting go getter freestyle she did to Tupac’s Hail Mary, clearly she is on a mission to get noticed and respected for her craft. ATTENTION WHORE will be hosted by the Super Friends and Core Dj’s DJ Trauma.

The release of ImYouNik’s “ATTENTION WHORE” is slated for March 15th 2013 hosted on Coast2Coast Mixtapes, Dat Piff and various other websites that host mixtapes.

Energy Incentives from ComEd, Nicor Gas and Illinois DCEO in One...