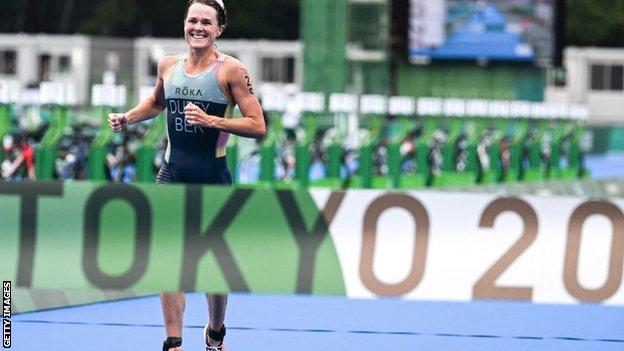 With a population of just 63,000, Bermuda became the smallest nation or territory to win an Olympic gold medal at a summer Games when Flora Duffy won the triathlon in Tokyo.

The 33-year-old, making her fourth appearance at an Olympics, came out on top of the 56-woman field with a time of one hour 55 minutes 36 seconds – more than a minute ahead of Great Britain’s Georgia Taylor-Brown and USA’s Katie Zaferes.

Bermuda already held the record for being the least populated country to win a summer Olympic medal thanks to a bronze for boxer Clarence Hill in 1976 but now they have their first gold medal winner.

“It’s been a heck of a lot of pressure for five years,” said Duffy.

“I would never recommend being an Olympic favourite for five years. Of course it’s made it all worth it now.

“I think the whole of Bermuda is going crazy. That’s what makes it so special to me is that, yes, this was my dream, but I also knew it…