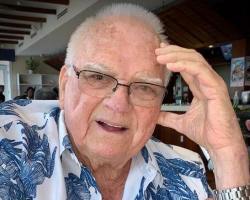 (CNS): Local businessman William McTaggart, better known as “Uncle Bill”, the father of Opposition Leader Roy McTaggart, has died. The announcement was made by the PPM chairman and former premier, Sir Alden McLaughlin, who said the Progressives family was deeply saddened to learn of his passing.

A respected Caymanian entrepreneur, McTaggart was best known for the hardware and bicycle store he founded in October 1964 after he invested in two dozen tins of paint and ten windows.

“Like so many across these Islands, I am saddened at the sudden passing of Mr William ‘Bill’ McTaggart, also known fondly as ‘Uncle Bill’,” McLaughlin said.

“Uncle Bill was one of that generation of iconic Caymanians whose entrepreneurial spirit and community-mindedness helped shape the Cayman we enjoy today. I have known Uncle Bill my entire life. The McTaggart family resided on Crewe Road, where I grew up, and his son, Capt. Chris McTaggart…