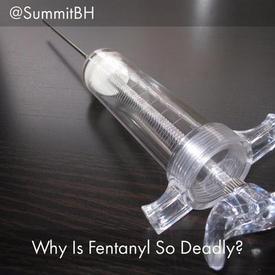 Almost unheard of even just a couple of years ago, fentanyl has dominated news headlines lately. The drug received, even more, attention when iconic singer Prince died of an accidental fentanyl overdose in April 2016. In 2016 alone, fentanyl deaths rose by 73 percent. In the U.S., opioid deaths have increased by 200 percent since the year 2000.

So what is fentanyl? And why has it claimed so many lives?

Fentanyl Is 50 to 100 Times Stronger Than Morphine

Although fentanyl can be legitimately prescribed by doctors to treat chronic pain and other conditions, illegal fentanyl also poses a problem. Most illegal fentanyl is produced in overseas labs. When it arrives on American streets, users have no way of knowing how potent it is or what has gone into it.

Prescription fentanyl is 50 to 100 times stronger than morphine and 30 to 50 times more potent than heroin. It takes just a quarter of a milligram to cause death. With such an extremely narrow margin of error, it’s easy to see how people can accidentally overdose after taking even a tiny quantity of the drug.

What makes fentanyl particular dangerous is that it’s easy and inexpensive to make. Although fentanyl deaths have been reported across the country, some areas have been hit particularly hard. In Ohio, for example, there were over 4,000 fentanyl deaths in 2016 — an increase of 30 percent over 2015.

Prescription Fentanyl comes in a variety of forms, including pill, injection, patch, lozenges, and even lollipops. Street fentanyl is typically sold as a powder or spiked on blotter paper. It’s also common for dealers to cut fentanyl into other drugs, such as heroin.

What Fentanyl Does to the Brain

Fentanyl causes the brain to produce a rush of dopamine, the chemical responsible for pleasant emotions. Users feel relaxed and euphoric. Side effects include drowsiness, nausea, confusion, and constipation.

The problem is that the brain can only produce so much dopamine at a time. As users become addicted, they crave the euphoria and relaxed state. However, they can’t quite attain the same high levels they’re used to, so they consume more and more of the drug.

The opioid receptors in the brain are also responsible for controlling the body’s breath rate. High doses of fentanyl can make a person stop breathing.

Do you know someone struggling with a fentanyl addiction? Are you seeking help for your own fentanyl problem? Compassionate, nonjudgmental help is available today. Reclaim your life by working with behavioral health experts who understand fentanyl addiction and how to overcome it.

Summit Behavioral Health offers both inpatient and outpatient programs to help people overcome drug addiction. It is possible to obtain a lasting recovery — even if you have relapsed before. Our programs are personalized and medically supervised. Call our behavioral health professionals today at 1-855-855-9199 to speak to a substance abuse expert about your treatment options.

US president not calling Pakistani PM is above my understanding, says...